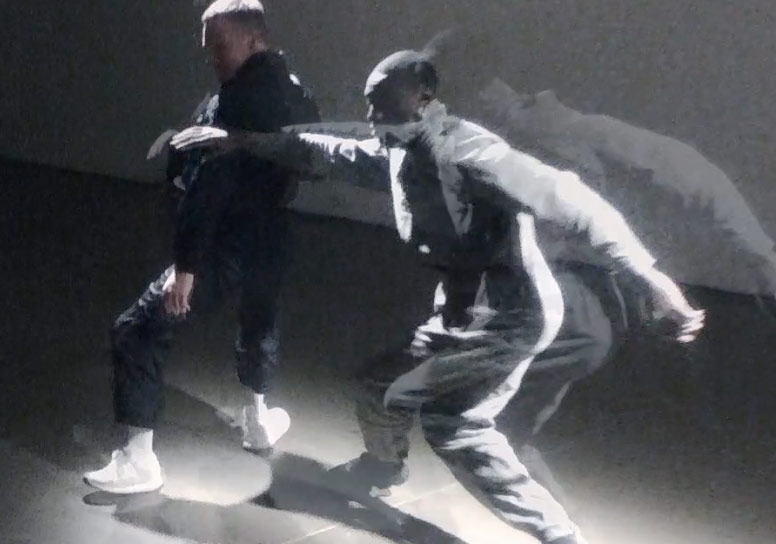 OS/X.Y. is a soma~cognitive stimulation application that runs on top of ∞OS operating system. At its essence are the basic principles of ∞OS: adaptive fluidity, tensivity, polyrythmicality, and variability. Our performances seek to create mediated experiences, where both the participants and the audience can have a direct physical, visual and auditory experience of these principles.

In this work we used some basic principles from ∞OS and Systema martial art and applied them to music-making and dance. Non-resistance, adaptive fluidity, integrity, conductivity and polyrhythmicality.

As the basis we took one of the Systema exercises: one person gives an clear impulse to the other who follows this impulse for some time [assimilation] and then gradually redirects – using his own body – the initial vector towards a slightly different outcome [redirection]. We ported this exercise into our music-making process and did an improv session following these rules.

We also integrated the principles of variability and polyrythmicality into our music-making process. Both subjective evidence and scientific research show that higher variability makes processes more engaging and lead to interesting interplay between phenomena and perception. We applied these same principles on the level of video-editing and montage as shown below.

Due to the continued physical practice all those principles and procedures were implemented automatically during the improvisation process. Only some bridges between the different mediums required conscious actions. This is the main objective of ∞OS practice, which aims to inscribe certain patterns of behavior through physical practice. It is sometimes even surprising to find that you do other stuff, not directly related to physical interaction (like music) based on the same principles you’ve been training with in your movement practice. Which for us serves as a great example of portability: one of the basic principles of ∞OS — the ability to transfer knowledge from one context to another.