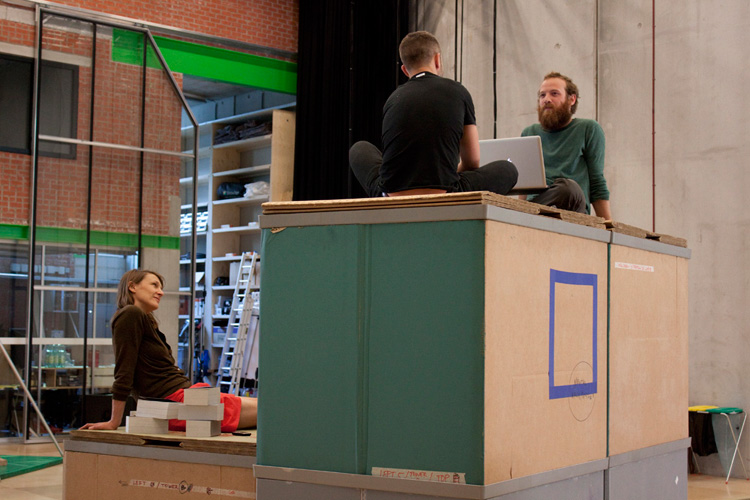 Holocracy is an organizational structure framework, which operates on the basis of roles, distributed authority, rapid iterations, and transparent rules. A member of an organization that uses Holocracy takes on a temporary role that comes with a certain set of responsibilities and rules. Based on those rules and responsibilities the member who has the role becomes accountable according to a certain set of milestones and deliverables. The member is also free to switch his/her “role” at any moment of time if that is compatible with the project development’s timeline.

We thought it would be interesting to demonstrate similarities between the two operating systems. We will also show how Holocracy principles can be better understood using physical practice exercises based on various ∞OS procedures.

Tensions as the Central Element of Holocracy

The notion of “Tensions” is the central element of Holocracy. A “tension” in Holocracy is the gap between the current reality and its potential. Once the tension is identified, it should be resolved through a set of concrete actions. In Holocracy tensions are seen as an opportunity to act. One of the approaches proposed by Holocracy is that once the Tensions are identified there should be a clear proposal on how to resolve them — describing reality where the Tension exists and the ideal version of the reality where the Tension is dissolved (see Holocracy constitution). It is considered that such approach will help envision the concrete actions that need to be taken by the Circle members (a Circle is a set of defined roles, which in itself may be considered as a Role).

∞OS also treats tensions as opportunities to act. In fact, many of the procedures in ∞OS are based on dealing with the incoming tension and either dissolving it or redirecting it to the desired outcome.

This way ∞OS offers a concrete, tangible, physical way to practice different strategies to deal with the incoming tensions. If the members of Holocracy practice ∞OS they would implement the patterns of dealing with obstacles, tensions and stress on the physical / subconscious / reflex level. And that could be very beneficial for their day-to-day operations.

Furthermore, the approach of accepting and redirecting the incoming tension outlined above, distilled through ∞OS practice, can then abstracted into a functional pattern to be applied in any organizational context. Consider, for instance, a Holocracy meeting for an organization running a YouTube channel. A Proposal is made to advertise a new product in the forthcoming videos, but an Objection is raised that it would increase the drop-off rate. The Proposal, in Holocracy, can only go forward if it carries within itself a concrete way to resolve the Tension that it generates. If we then follow the ∞OS procedure above, first of all, we attempt to accept the Tension (or the fact that there’s an increase in drop-off rate in advertising). However, as the next step we can suggest OK, how could we still go ahead with the Proposal but to make it so that the drop off rate is lower? A great way to do that is to weave in the advertising narrative into the narrative of the video (Assimilation procedure).  We could make a creative in such a way that continues the narrative of the video first and then performs a kind of product placement, which is almost obvious and self-aware, however, also fitting very well to the original story. In this way we still go ahead with the proposal but we also have a concrete recipe to solve the Tension that it creates without giving up the original intention to monetize on content.

Another interesting premise of Holocracy is based on organizing sets of Roles into Circles and making sure that the organization members can also change roles and circles when they wish to work on a different set of tasks. In order to understand how it really works this same approach can be used in a training session. Usually ∞OS trainings are structured to increase interactions between all the participants. So that everybody has a chance to try different roles and to work with different partners. To apply this idea in the context of ∞OS training is to offer a concrete physical experience of this process.

A group could be separated into 3 subgroups (Circles). Each Circle has a set of objectives (e.g. Circle #1 explores the procedure of non-resistance, Circle #2 explores the procedure of provoking vulnerabilities, while the Circle #3 is focused on recovery procedures). Each of the circles has a deadline (1 hour) to deliver a working and efficient model of behavior in a certain situation to the rest of the group for further exchange. Every circle has 3 roles: the facilitator, the presenter, and the controller  — each is accountable for a certain aspect of work. The facilitator leads the process, the controller makes sure the objectives are reached, the presenter will share the results with the others. Once the time is up the presenter in each Circle shares what their Circle has discovered with the rest of people (the other Circles). They have to present a physical pattern of interaction and demonstrate various behavior strategies, including the one they find the most successful. Then the facilitators change Circles and each one tries to implement those strategies in a different circle. Such approach provides a direct physical experience of the Roles and Circles in Holocracy and lets the participants use their body memory to better understand and remember how those concepts operate and the possible obstacles that may occur.