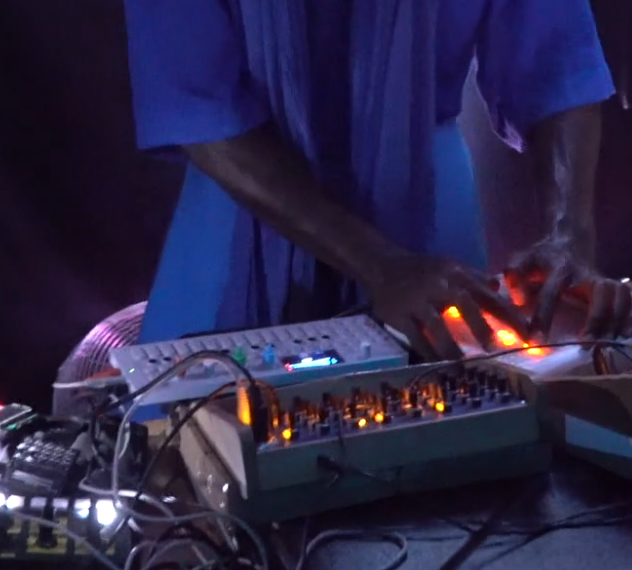 A live music act can be engaging in many different ways, depending on the context. In the realm of techno one of the objectives is to engage people into a certain dynamics, to bring them in resonance with the rhythms and the music.

Most of the time this can be achieved by introducing an element of variability into sound, while also keeping it repetitive. It is a well known fact that human beings respond well to variability. Our attention depends on it. Things are that mundane and uniform are “boring” after some time, while things that are constantly changing are considered to be more engaging and interesting.

∞OS practice is based on exploring variability in movement. In fact, it’s one of the most important principles (as exemplified in Oscillatory Procedure). By way of consecutive oscillatory impulses we create a series of phases: tension-relaxation. A movement of giving in is followed by a movement of resistance. The temporary resistance provokes more pressure within the environment, which can then be released with more force when letting go. In terms of music, we give space (e.g. using a filter function on a mixer or removing the low frequencies) and then we take space (bringing the frequencies back).

When we explore this approach on the level of the body we can learn a lot about this dynamics and how engaging it can be. In fact, many natural processes that are dynamic and yet stable are based on this same principle. For example, prey-predator interactions or seasonal weather formations.

This same approach is often applied in music. In this case study NSDOS (aka Koo Des, an ∞OS practitioner) applied some of the ∞OS principles outlined above in his set. It can clearly be seen from the waveform of his set below without even playing it. A moment of silence is followed by a moment of filling the (frequency) space with beats, samples and rhythmical patterns.

Then it is followed by silence again, leaving only one or two sounds to give the time and space to regroup. Then a new beat pattern is introduced. And while the set stays at a stable bpm, constant phase change and transmutation of rhythmical patterns makes it engaging and keeps people on the dancefloor throughout the whole performance.

This same approach is commonly used in techno tracks as well, not only in live sets. A moment of introducing the instruments creates a build-up. It is followed by a break, when most of the elements are taken away. This creates a lack and desire on the side of the listener, which is then “rewarded” with the key moment of the track when all the elements are brought back with renewed intensity. Check out the example below: