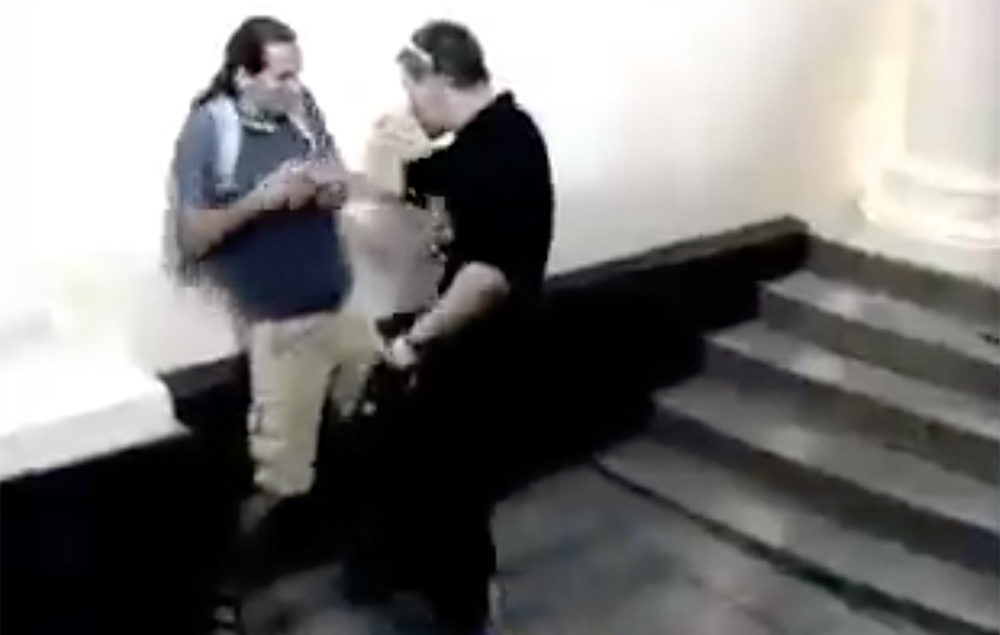 In this case study we will look how ∞OS approach can be used for conflict resolution. We will look at a real-life case where a subject (an ∞OS practitioner) was approached by an attacker on the street, threatened with physical violence, and how the further actions of the subject lead to de-escalation of conflict and a complete reconfiguration of a potentially dangerous situation.

At about 0.30 one September night in Marx Dormoy area in Paris the subject (who has been practicing ∞OS) went to an internet shop to print something out. The neighborhood is not the safest one in Paris and street conflicts are common in this area.

After printing out the documents the subject was approached by an attacker from the street: a tall, strong drunk guy who came into the internet shop, put his arm around the subject’s neck, held it tight, and started saying “You have a problem” to the subject. To which the subject replied that he didn’t have any problem. The attacker responded that yes, indeed, the subject had a problem and a very big problem (probably referring to himself or his further intentions).

The ∞OS subject then decided to apply a series of ∞OS procedures in order to prevent the situation from escalating any further and bring the potential conflict to an end.

The people inside the shop were witnessing the situation afraid to make an action because the subject had his friends outside of the shop (who always hang out there), so it was not an option for them to step in and to ask the subject to leave as it would have led to further confrontation.

Instead of escalating the situation any further by saying that he did not have any problem the subject decided to apply Redirection Procedure from ∞OS. The approach is useful when there’s a localized incoming tension or impact and one needs to escape and dissolve this tension using the freedom that is still left.

The physical metaphor as exemplified in the instructional video above is to first accept the tension, not to fight against it, not to resist it, but also not to give up to it.

Instead, you follow the incoming impulse (saying “yes, and” instead of “no, but”) and while you follow that impulse along its initial vector, you bring it to a new destination, delivering the whole system to the new state of equilibrium (the details of this shift are exemplified in Destabilization Procedure).

The actual procedure employed by the subject was as following:

1) After saying a few times “I don’t have a problem” and escalating the situation further (the grip on his neck was getting stronger, the guy was becoming more and more aggressive), the subject instead decided to agree with the proposition and to say “Yes, and” instead of “No, but”… (so he accepted the “hold” or the “push” and instead of fighting against it he went with it at first, agreeing to the initial proposition).

2) So he relaxed in the tightening grip of his opponent and responded “Yes, I do have a problem”. (going with the flow)

4) The subject then pointed to the papers that he’s just printed out and said: “look, I have these papers here that I printed out… it’s an application form for a French visa… and this is causing me a lot of problems… maybe you could see that from outside of the shop… so you’ve noticed it right, I do have a big problem with that visa”.

5) The attacker then looked surprised, took his arm off the subject’s neck, made a step back, looked at him and said: “Oh brother… Oh… visa… ok sorry brother, no problem… i understand…”. Then he made a step towards the subject, hugged him gently and said “if you need any help, brother, I’m outside, have a good night, brother, good luck with your visa” and then he went out of the shop.

This example shows how ∞OS can be used not only for physical confrontations but also for intersubjective relations, dissolving the tension by first going with the flow and then reconfiguring the situation to bring it to a new equilibrium.